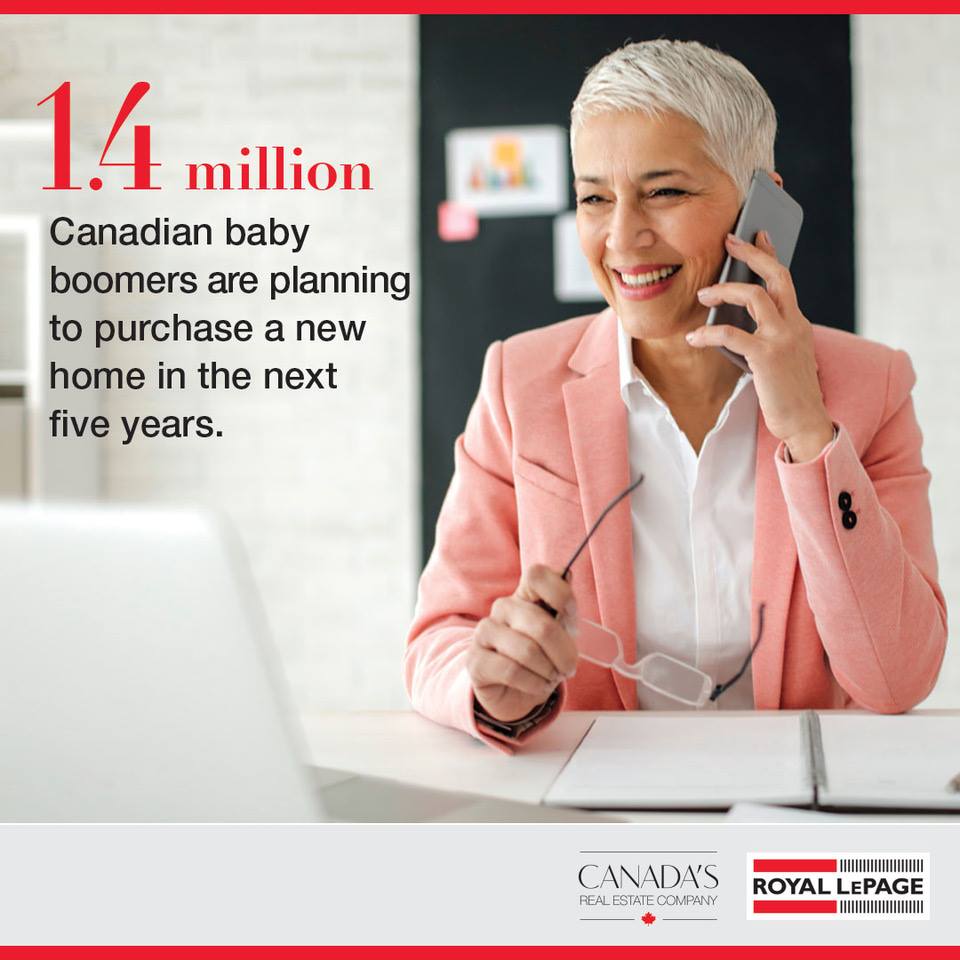 More than 1.4 million boomers across Canada expect to buy a home in the next five years

TORONTO, August 8, 2018 – The Royal LePage Boomer Trends Survey, released today, found that 17 per cent of Canadian baby boomers (born between 1946-1964) are planning to purchase a new home in the next five years. This is expected to have a meaningful impact on the housing market, as the group represents 1.4 million[1] potential buyers and sellers. The research, conducted by Leger for Royal LePage, found that more than half (59 per cent) are opting to renovate their current residence rather than buying a new home.

“Don’t count them out yet – baby boomers will impact Canada’s housing market in a big way in the coming years, as another 1.4 million of this large demographic are expected to sell and buy real estate between now and 2023,” said Phil Soper, president and CEO, Royal LePage. “While the wave of older consumers will increase competition for condominium property in particular, there is no single type of home that boomers will be investing in.”

“Our research does indicate that smaller cities and recreational areas will attract more investment than major cities,” continued Soper. “This large segment of the population views our big cities as generally unaffordable for retirement purposes.”

“Our 2017 research into the largest group of first time home buyers in Canada, which we call the Peak Millennials, showed many were roosting in the family nest well beyond the traditional age of exit,” Soper said. “With this work, we have confirmed that boomers are allowing children to reside at home well into adulthood. Yet they won’t stay forever, and when they go, the folks are going condo shopping.”

Currently across Canada, according to the survey, over three quarters (77 per cent) of boomers own a home, nearly one in five (19 per cent) rent, while a very small number (1 per cent) live with family. When zooming in on current dwellings, the largest number (61 per cent) of boomers across Canada live in a detached home, followed by condominiums (21 per cent) and semi-detached/town homes (12 per cent).  Of boomer respondents planning to purchase a home in the next five years, 45 per cent are most likely to purchase a detached home, 32 per cent are most likely to purchase a condominium, while 10 per cent noted strongest interest in a semi-detached/town home and 5 per cent said a recreational property.

When asked about plans nearing or during retirement, one in five (20 per cent) boomers intend on buying a new property, while 71 per cent do not plan on buying a new home. Respondent sentiments were mixed on the desire to downsize, with less than half (41 per cent) stating that they would seek a smaller dwelling in retirement, while just over half (52 per cent) have no intention of downsizing.

Considering recent home price increases in several Canadian markets, more than half (56 per cent) of boomers polled said they consider the housing market in their city or region to be unaffordable. This number jumps to 78 per cent and 63 per cent of respondents in British Columbia and Ontario, respectively. When asked about their willingness to relocate, over one-third (34 per cent) of respondents nationally stated that they are open to moving to another city or suburb where property prices are more affordable. Of respondents willing to move for improved affordability, 35 per cent would prefer to stay within one hour of their current residence, 30 per cent would be willing to venture further out (one hour or more away), while 20 per cent stated that they are open to living anywhere.

A minority of respondents plan to purchase or reside in a secondary home or live elsewhere for portions of the year. Ten per cent plan to buy a secondary property, while 15 per cent plan to sell their primary residence and move into their currently owned secondary property full-time. Nearing or during retirement, nearly one quarter of boomers nationally plan to live in another city (24 per cent) or country (23 per cent) for at least three months of the year.

Financial Status and Support for Children

Overall, a large segment of the boomer population is on strong financial footing and on a clear path to being mortgage-free, if not already. According to the survey, over three-quarters (77 per cent) of those who own a home have paid off over 50 per cent of their mortgage, and 61 per cent have paid off over 90 per cent. Meanwhile, half (50 per cent) of boomers who own a home have less than 25 per cent of their retirement savings tied to real estate.

If they were to make a property purchase, 54 per cent of respondents stated having a budget of under $450,000, while 25 per cent possess a budget of $450,000 or higher. In the current market landscape, many boomers perceive very little impact from the federal government’s new OSFI measures on their personal circumstances. Half (50 per cent) of respondents do not feel that the new OSFI measures will impact the type of property they can afford. However, one in four (25 per cent) do believe the measures might impact their options, while approximately one in five (21 per cent) said they have caused them to second guess buying a home.

“Baby boomers are the most affluent generation in Canadian history, yet the journey has not been without challenge and adversity. Through several difficult economic recessions, the equity in their homes has proven to be wealth bedrock. This is a generation that deeply values home ownership and very much wants their children to have the same opportunity,” concluded Soper.

With the rapid appreciation of home prices in the province, boomers in Ontario are the most likely to consider downsizing as they approach retirement. Almost half (49 per cent) of all respondents said they plan to move into a smaller home as they near or enter their golden years, the highest rate in among all regions surveyed. Four-fifths (80 per cent) of boomers in the province currently own their home, and 20 per cent plan to buy a new property within the next five years.

As boomers in Ontario plan their retirement, they are also the most likely to consider changing cities as they look for a home they can afford. Forty per cent of respondents stated that they are willing to move to a new city or suburb where homes are more affordable, the highest rate in the country. Thirty-two per cent of those willing to move would consider moving more than an hour away from their current city.

While most boomers in Ontario would prefer to remain in a detached home when downsizing, many are open to condominium living. Forty-six per cent of respondents said they would consider a condominium for their next home purchase.

“Boomers in Ontario are looking to reduce expenses as they approach retirement,” said Caroline Baile, broker, Royal LePage Your Community Realty. “By downsizing to a condo or moving to a more affordable city, boomers are able to tap into the equity in their homes and have more certainty about their costs. They are looking to transition into a lifestyle that gives them more freedom to pursue other activities without having to deal with time-consuming upkeep and unexpected repairs.”

[2] The term “Peak Millennial” was first coined by U.S. economist, Dowell Myers to describe the largest cohort of millennials and their potential purchasing power (born between 1987 and 1998). For the purposes of homebuyer research, Royal LePage focuses on Peak Millennials aged 25 and older. In June 2017, an online survey of 1000 Peak Millennials (age 25-30), was completed using Leger’s online panel.